Nvidia’s RTX 3070 and AMD’s RX 6700 XT are two competing graphics cards in the “high-end” GPU category. Both these cards have a similar performance and even the launch prices are very close in the $500 range. For someone who’s looking at a decent graphics card that offers excellent gaming or rendering performance and doesn’t put a hole in their pockets, the RX 6700 XT and the RTX 3070 are a couple of the best choices. But how do these two GPUs compare with each other? Which among the 6700 XT vs 3070 is the best graphics card?

In this guide, let us compare the two most popular graphics cards from Nvidia and AMD. We will take a brief look at the specifications of the RTX 3070 and the RX 6700 XT GPUs. After that, we will compare 6700 XT vs 3070 in terms of features, gaming performance, and other important factors.

Let us begin the comparison starting with a brief overview of the RTX 3070. Nvidia launched the RTX 3000 Series of GPUs as a successor to the RTX 2000 Series with a new architecture, code-named Ampere.

Coming to the GPU in the discussion, the RTX 3070 is an upper mid-range or high-end graphics card in the RTX 3000 Series. In terms of performance, the RTX 3070 has a similar or slightly better performance when compared to the previous generation’s flagship, the RTX 2080 Ti.

While the performance of the RTX 3070 isn’t a surprise due to the architectural improvements, it does this at a price that is less than half of the RTX 2080 Ti. Impressive. Speaking of price, the RTX 3070 has a launch MSPR of $499.

It has all the bells and whistles such as Ray Tracing, Tensor Cores, NVENC, DLSS, etc. The RTX 3070 can draw up to 220 Watts of power. As a result, the system power supply must be at least 650 Watts.

AMD was a little late to the party, but it made an entrance with the Radeon RX 6000 of GPUs. Nvidia already created the buzz around Ray Tracing. So, AMD, with its RX 6000 Series GPUs, included hardware for this with its own name (Ray Accelerators). 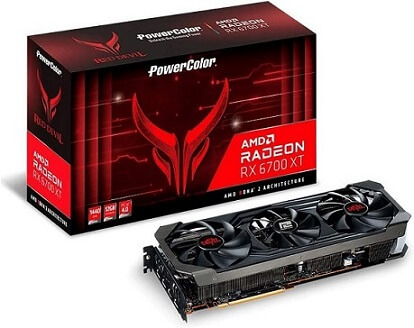 AMD went to its preferred foundry partner, TSMC to manufacture the RX 6700 XT (and the other RX 6000 Series GPUs) using its 7 nm process node.

From the above comparison, it is clear that both the RX 6700 XT and the RTX 3070 show very similar performance, in all three game settings.

Both the RTX 3070 and the RX 6700 XT are loaded with useful features. Nvidia started the whole Ray Tracing trend with the RTX 2000 Series of GPUs. But with the RTX 3000 Series, they improved it a lot.

AMD also entered the Ray Tracing market with their RX 6000 Series of GPUs. As this is their first attempt, the results were slightly underwhelming when we compare them to Nvidia’s implementation.

Another important feature of Nvidia GPUs is DLSS or Deep Learning Super Sampling. They have dedicated hardware in the form of Tensor Cores that can upscale low-resolution images.

AMD also has similar technology, its FSR or FidelityFX Super Resolution. As this is a new feature, the support from game developers has not fully blossomed.

So, the important question is, which one to buy among the RX 6700 XT vs 3070? As both of these GPUs have very similar price and performance numbers, both of them are a very good choice.

If you are getting these cards close to their MSRP, then we recommend purchasing any of these cards. But if Ray Tracing and Video Encoding are a priority, then the RTX 3070 has a slight edge due to superior Ray Tracing technology and better NVENC hardware.

In this guide, we saw some basic specifications of both these graphics cards. After that, we compare the RX 6700 XT vs 3070 for their performance, features, price, and power.