The electronics industry has heavily relied on sensors that have rigid proportions. But can the rise of flexible, printed sensors become a game-changer for a myriad of applications, where form-factor and convenience play the core role to implement a particular technology?

Conventional electronics based on PCBs are produced efficiently, resulting in a very high yield. However, they are rigid, take up a lot of space, possess a fixed form-factor, and are not always lightweight. Although sensors such as thermistors can be small in terms of size, the majority are large and rigid. On the other hand, printed sensors are very thin and flexible. Also, their large-scale, cost-effective production allows rapid prototyping and customized printing for different applications.

So, what trends drive the adoption of printed, flexible sensors? A large part of this answer lies in the revolution brought forth by Industrial IoT (IIoT), or Industry 4.0. Here real-time monitoring can be performed digitally by retrofitting such sensors to industrial equipment for predictive maintenance.

Healthcare is the next area that drives their adoption, where electronic skin patches offer the benefit of remote patients’ health monitoring. Following it, smart homes and cities are the next segment that could drive this adoption. The idea of ​​having several connected low-cost sensors around our lives is quite appealing and valuable for long-term use.

In a typical workplace, printed sensors would be able to check room temperature, monitor humidity, measure air-quality, and help in preventive maintenance. They do so by identifying vibrations, force-sensing via trackpads, printed fingerprint sensing, leak detection, and many more. Fig. 2 paints a vivid picture of this. However, not every sensor performs the same function as the other.

Besides automation, electric pianos and medical applications, pressure sensors (piezoresistive or piezoelectric) have a scope for smart flooring and force-sensitive touchpads on laptops. Till date, temperature sensors were made with inorganic materials, but with printed flexible technology they can be done in 2D at a relatively cost-effective rate. 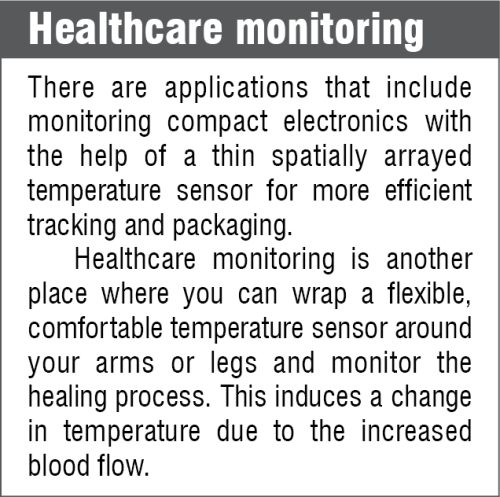 Optical (or light) printed sensors have a similar architecture to organic photovoltaics but are optimised for light detection rather than power generation. When it comes to e-textiles, capacitive strain sensors are an ideal choice as they enable monitoring of medical rehabilitation or can be incorporated in gloves for augmented reality. With many compelling applications that provoke curiosity, let’s take a deeper look at some of the applications.

Thermistors and RTDs are generally quite small, inexpensive, and adept function-wise. Hence, printed electronics is preferred as it enables a spatial array of temperature sensors. While the amount of charge stored in a battery depends on a lot on temperature, these sensors are well suited for implementing battery monitoring in mobile phones and electric vehicles. The range of batteries can be significantly increased by making appropriate adjustments in temperature. Subsequently, the sensor can also alert any problems occurring in the battery that can cause heat spikes.

Fig. 5 shows an integrated pressure / temperature sensor that can predict the failure of lithium-ion batteries when they start producing gas and swell up. These thin, printed sensors can be laminated on top of each other and wrapped around each battery cell to detect temperature and pressure. Such laminated sensor films also contain heating elements to provide an integrated solution.

This is a unique method to obtain signals from a passive matrix array, commonly used for capacitive sensing purposes. So, rather than using voltages to scan each line and then read off the columns, this technology (see Fig. 6) measures variation in the electric current that needs to be supplied to each row or column.

Each element can be simultaneously monitored, while everything else is kept at a steady state; and then the extent of those adjustments is monitored rather than sequentially scanning through the voltage. This solves many issues associated with capacitive touch sensors and also improves signal-to-noise ratio (SNR) and temporal resolution.

For instance, it is impossible to operate a phone with gloves on. The water droplets on the touch screen add to the discomfort. This new readout methodology enables a much-improved sensitivity, ignoring any element (water or fabric) present between the finger and screen for a seamless operation.

As interesting as it sounds, an electronic nose is basically an array of gas sensors with each having a slightly different function than the other. When exposed to a mixture of gases, there is a distinct relative response from each individual pixel. With proper software, a composite response can be worked out to disentangle the contributions from each of the pixels on this array.

Fig. 8 shows an electronic nose made from carbon nanotubes and injected on a flexible polymer substrate. The inks on the bottom-right display real-time responses to methane, carbon dioxide, and ammonia concentrations, showing that the gas sensor is capable of effectively analyzing a wide range of gases.

However, it cannot detect tiny traces of hazardous gases, mainly because it’s not designed to identify specific gases at a molecular level. For common gases, it works quite well and can disentangle a mixture of gas concentrations.

As seen in Fig. 9, PragmatIC and Arm along with Manchester University have collaborated to produce an electronic nose that includes eight gas sensors based on organic transistors. The ICs used are much more cost-effective than silicon chips placed on a flexible plastic.

Since printed flexible electronic circuits offer a wide range of benefits such as flexibility, rapid prototyping, lower costs as compared to conventional electronic circuits, it is worth noting the progress made so far. Here’s a brief rundown of their growth.

Quad Industries, in association with Henkel and Byteflies, has deployed skin patches in Belgian hospitals for epilepsy monitoring. Mekoprint has commercialized smart diapers that consist of electrodes made with carbon inks. On detecting moisture, the resistance changes, which is then processed and sent to an app for providing efficient care.

Wiliot has released flexible, wireless RFID tags that have a silicon IC and an antenna for harvesting energy from electromagnetic radiation. It can also perform sensing by analyzing a metal’s conductivity. Applications include supply-chain tracking and cloud sensing.

Thanks to the large investment by PragmatIC, a UK based company that produces flexible metal-oxide ICs, it is now possible to inexpensively manufacture such ICs on a large scale for enhanced RFID functionalities. The Swedish firm, Ynvisible, has partnered with Evonik and Epishine to develop self-powered shelf-level packaging signage along with digital item price indicators.

A unique capacitive sensor made by Bare Conductive from a low-cost carbon based ink changes its capacitance with a rise or fall in water level. This information is then sent to the cloud for processing.

PolyTC has successfully used its transparent functional films in some of Volkswagen’s and Audi’s latest models. The transparent capacitive film consists of a metal mesh that can detect changes in capacitance when in contact with different areas.

Printed conductors for heating is another attractive prospect. Instead of inefficiently heating the entire vehicle interior, the printed heaters focus on heating only specific areas near the occupants such as doors, windows, and seats – thus reducing the total required heating energy by 20%. This technique has been tested out in Volkswagen and BMW models.

Ideal for the future

After going through all the above innovations, we can conclude that the massive growth of IoT will surely increase the demand for sensors. As of now, printed flexible electronics can greatly fulfill this cost-effectively and with few materials.

The year 2021 has been quite encouraging for printed electronics companies to raise funds for applications and address the needs of large markets. This is expected to continue in 2022, thus leading to a wider adoption in areas where processing is still done using conventional electronics.

The article is based on the presentation ‘Commercially Compelling Printed / Flexible Sensor Innovations’ at IDTechEx and the market research report ‘Printed and Flexible Sensors 2021-2031.’ The article was compiled by Vinay Prabhakar Minj, Technology Journalist at EFY.